Help your community by making a donation to Rainham Foodbank. We are collecting until December 4th. https://t.co/m78mBm5bPc

Christmas has come early to the Art Department at Harris Academy Rainham and year 7 and 8 have been busy creating the design for our school Christmas card. Thank you to everyone who entered the competition and well done to the winner, Eugen Jurjiu from 7F! https://t.co/BWgQwm7Cp0

Happy World Kindness Day! Our Year 7 Captains Nell, Alicia and Sophie are sending emails to check in with a Year7 student currently shielding. Well done, this is such a kind act. https://t.co/xBIQ40MLmB

Year 11 Mock Examinations will take place from 2nd November 2020. For more information and the full timetable see our website at https://t.co/Z3rQZ7ceI3

Welcome To Our Virtual Visit From The Principal https://t.co/JWRZPOcNNV

Library Help Desk and Book Collection Service The library is offering a help desk and book reservation/click and collection service via the library door, located in the quad area. Please see below poster for opening times, weather permitting. https://t.co/SAaXz28cyY

Y7 student council applications will open Monday 28th September. Applications can be downloaded, collected from learning guides or from the library. Completed applications should be posted in the box in the library by Wednesday 7th October. https://t.co/wfl7I30mfP

Please see our website for a letter from London Borough of Havering regarding Covid 19 https://t.co/ob1pEQBMvK

Due to Government Covid-19 restrictions, the Open Evening scheduled for late September will no longer take place. A virtual tour and a range of other information and resources will be placed on the Academy website by 5th October and will be available until 31st October.

LGBT Advocates - For a Community Where Everyone Belongs

Our new LGBT Advocacy Team of students and teachers helps to make sure everyone at Harris Academy Rainham feels they belong.

In the classrooms and corridors of Harris Academy Rainham many students now wear ‘smiley’ rainbow badges to show they are members of our new LGBT Advocacy Team.

It all started in November last year when Ms West decided to attend a training session run by the LGBT awareness charity, Stonewall. “We had students at the school who were openly gay and we felt that they weren’t being supported in the right way,” says Ms West. “Sometimes homophobic language was being used, such as describing something as ‘really gay’, and it was something we felt needed to be addressed.”

Ms West came back from the course determined to recruit and train a team of LGBT advocates to help children at the school discuss sexual orientation and gender identity. She has been amazed by the positive response. “We’ve so far recruited 70 advocates, including 23 staff,” says Ms West. “Everyone gets the same training. We’re all equal, it’s just some happen to be staff and some are students.” Teacher advocates wear special rainbow lanyards. 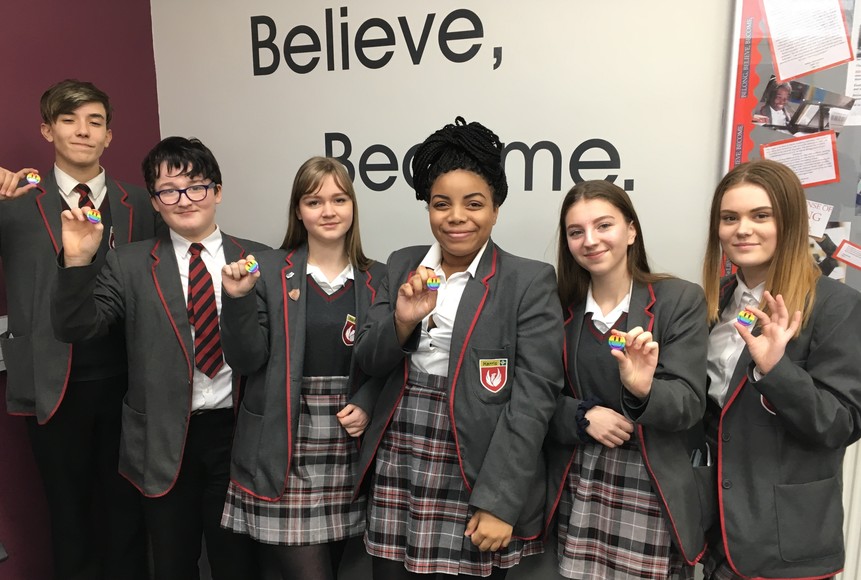 Across the UK, young people who identify as lesbian, gay, bisexual or trans are more likely to experience bullying than other children, with a negative effect on their education and emotional wellbeing, according to research.

William, Year 10, says he wanted to be an LGBT advocate because he knows how it feels to be called names by other children. “I’m openly gay and being called names made me feel vulnerable because I felt different to everyone else,” he says. “I wanted to become an LGBT Advocate so that no one else has to experience that sort of thing.”

Sophie, also in Year 10, has a sister who is bisexual. “I’ve seen how hard it’s been for her growing up, so I want to become an advocate to make sure no one else has to go through that,” she says.

Launched in November, our LGBT Advocacy Team is already making a difference. They have organised special assemblies for years 7-10 to talk about homophobic language and why it is inappropriate. They explain what terms such as transgender, bisexual, and non-binary actually mean, so that people have the facts. And they stress that it’s OK to be what you want to be. Most important of all, they explain that anyone who needs support can approach one of the academy’s LGBT advocates – either a student or a teacher – so they don’t have to feel alone.

The team has also organised an LGBT section in the school library (pictured below) with the help of Ms Burt, and put up displays around the school with messages such as “I’m gay, get over it’, or “I’m gay, let’s get the meaning straight”. 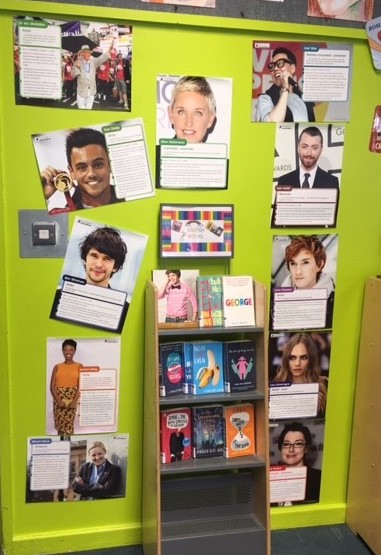 Our LGBT book display in the school library.

“We’ve had a few people laughing during our presentations,” says Alex, Year 9, “but that’s what happens when people haven’t heard the terminology before, so you expect them to laugh a bit.” Keira, Year 10, agrees: “I think at first the Year 7s and 8s are a bit shocked that we’re talking about it so openly.”

People tend to be scared or feel awkward about things they don’t understand, says Ms West. “The role of a school is to educate. I think some people don’t understand the power of words to hurt. Term’s like ‘That’s so gay’ have been around for such a long time and not been challenged until now. You have to educate people.”

Our young advocates have also been trained by more experienced student advocates from Woodlands School in Basildon (pictured below). “We discussed how to be a really effective advocate,” said Alex, Year 9. “They talked about the proper pronouns to use for someone who’s trans or non-binary, and the proper definition of words like transsexual, or transgender or inter-sexual or trans male too.” 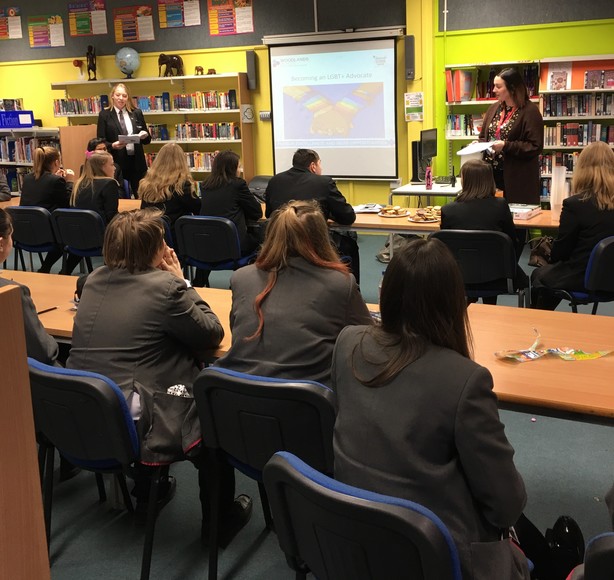 Although it’s early days, the advocates have already been able to help other students who were perhaps experiencing homophobic language, or just needed someone to talk to.

“I’ve had students come up to me because other children have made fun of them,” says Sophie. “I’ve been able to explain to them that it’s not their fault, and that you can be whoever you want to be.  I ask the people who are saying these hurtful things why are they doing it? The girl who needed my help told me the other students hadn’t come near her since we stood up to them. That made me feel good, that I’d been able to change something for someone.”

Jessica, Year 10, thinks students at the academy are now more comfortable talking about LGBT issues than they used to be. “Before it was ‘let’s not talk about that’, but now everyone’s like openly talking about it, which is great,” she says.  Alysha, Year 10, agrees. “It’s more accepting now. People know they have students they can talk to if they don’t feel comfortable talking to adults.”

Ms West believes the advocates are changing the school culture. “I’d like to think that in the corridors of the school you’re now able to be who you want to be,” she says. “Our school motto is ‘Belong, Believe, Become’. I really believe the LGBT advocacy group is making our academy an inclusive community where everyone feels they belong.”

It’s very early days, but all the advocates would like the scheme to develop further. Alex has a clear vision of what he wants to see. “We’re hoping to have the whole school in badges,” he says. “We’d love that.”